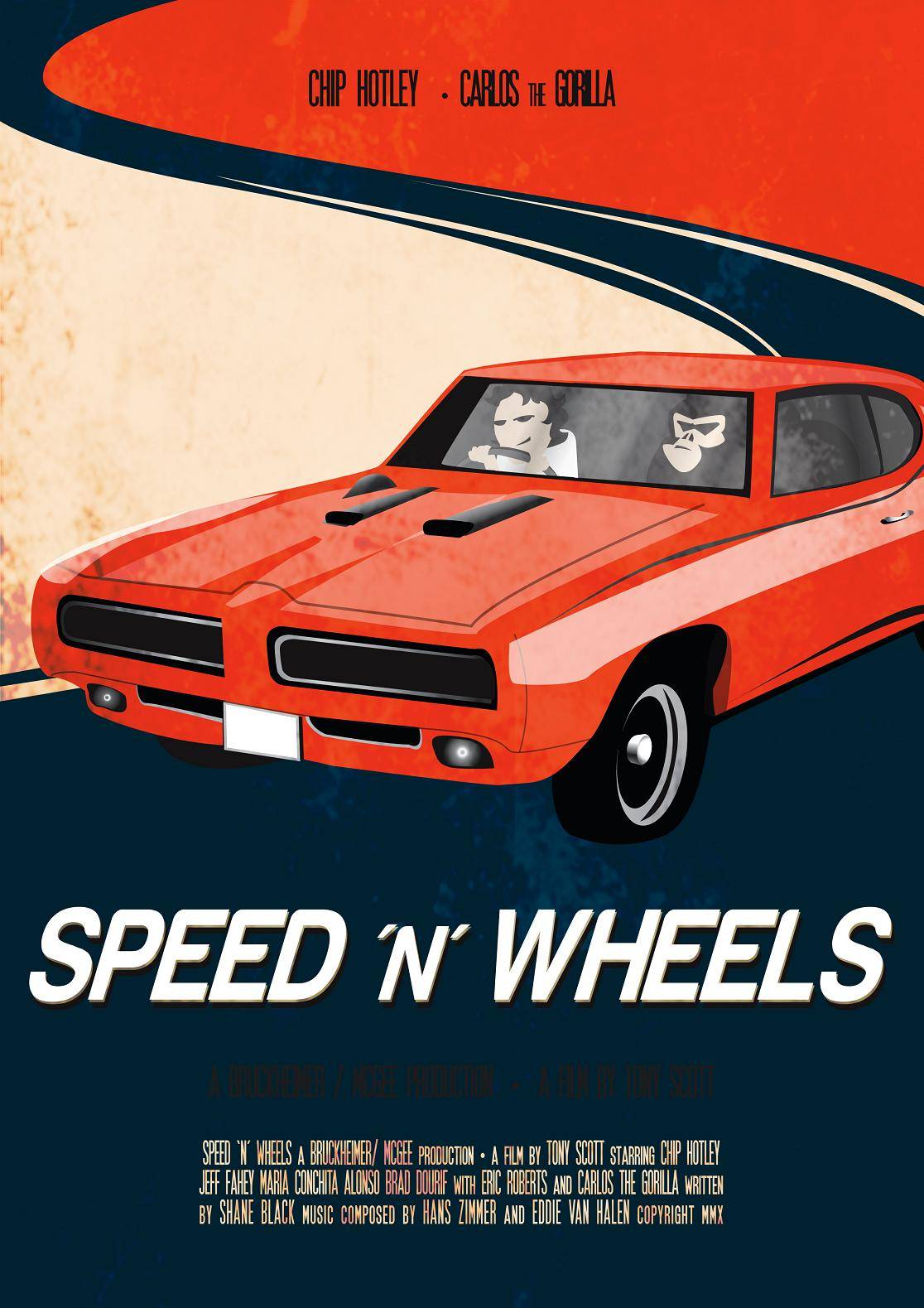 Well, she's done it again! My little sister comes up with an alternate take on the brief that results in a totally kick-arse piece. While not technically a 'remake', this IS a reinvention of the movie poster featured in Special Episode 5/3: 'What I've Been Up To Since My Band Broke Up - Smiley'. As I mentioned in SE 5/3's commentary, I love doing movie posters, but my style limits my ability to realise them fully. Cecile, with all her creative and technical wizardry, has been able to do just that. Who knows, if I ever publish a book, I might slip Cecile's poster in in place of the original for SE 5/3... I admire Cecile's lateral approach to tasks. This Ep has been tackled in an interesting way, as was her previous Guest Episode. I hope I can rely on her for more awesome Guesties in the future...! Finally, an Ep in this (final!) Series of Guest Episodes of which I can be proud. As I type, I'm on tenterhooks, as I am yet to receive the final two Guesties...! I know they're going to be great, as I completely trust the artists (whose deadlines LOOM), but this is the most up-in-the-air I've ever allowed the publishing of my comic to be! After my hiatus, the format's going to go through a bit of an overhaul, so this type of thing will be the norm, but until then, YIKES...!

Reply Danielepill
6:26 AM on September 16, 2022
https://sites.google.com/view/pin-upcasinoslots/
Introduction: What is a pin-up casino?

A pin-up casino is a gambling establishment that is geared towards female customers. The term "pin-up" refers to the style of artwork that was popular in the early to mid-20th century, which often featured scantily-clad women in suggestive poses.

The first pin-up casino opened in Las Vegas in 2014, and they have been growing in popularity ever since. These casinos typically feature luxury amenities and services, as well as a more relaxed dress code than most casinos. They also often offer special events and promotions that are designed to appeal to women.
Whether you're looking for a fun night out with the girls or a romantic evening with your significant other, a pin-up casino can be a great option. So if you're feeling lucky https://sites.google.com/view/pin-upcasinoslots/ , why not give one a try?
Casino
The Pin-up casino https://sites.google.com/view/pin-upcasinoslots/ is one of the newest and most popular casinos in town. It's known for its eclectic mix of games, ranging from blackjack and poker to roulette and slots. But what sets the Pin-up casino apart from other casinos is its unique atmosphere.
The casino is decorated with vintage pin-up posters and photos, giving it a retro feel. The staff are also decked out in vintage clothing, adding to the overall theme. Even the drinks menu is retro, with classic cocktails like the gin fizz and the old fashioned.
If you're looking for a fun and different casino experience, then be sure to check out the Pin-up casino.

Reply Saralbinnaexcap
1:06 AM on September 16, 2022
Defining sandbox games
A sandbox.co.com game is a type of video game in which the player is free to roam and explore the game world at their own pace without being constrained by linear objectives or storylines. The term "sandbox" comes from the fact that these games are designed to be open-ended and allow players to experiment and "play around" in the game world.
Some popular sandbox games include Minecraft, Grand Theft Auto, The Sims, and Animal Crossing. These games all have different gameplay mechanics but they all allow players to explore and interact with their game worlds in unique ways.
Sandbox games can be contrasted with linear, story-driven games which often have more restrictive gameplay. Sandbox games sandbox.co.com offer players a sense of freedom and flexibility that can be very appealing, especially in today's busy world.
The open world: What makes a sandbox game?
Most video games can be classified as either sandbox or non-sandbox. In a nutshell, a sandbox game is one where the player has a great deal of freedom to explore the game world and interact with it in whatever ways they see fit. Non-sandbox games, on the other hand, are much more linear and focused, and don't give players nearly as much freedom.
So what makes a sandbox game? To start with, it should have a large and detailed world for players to explore. There should be plenty of side quests and activities to keep players busy, and the main quest should be non-linear, giving players the choice of how to approach it. Good sandbox games also provide players with many different ways to interact with the world and its inhabitants.
The future of sandbox games: Where are they headed?
In the last decade, sandbox games have become increasingly popular. They offer players a unique and open-ended experience, with little to no restrictions on what they can do. This freedom has led to some of the most creative and innovative gameplay experiences in recent years.
Looking to the future, it seems likely that https://sandbox.co.com/ sandbox games will continue to grow in popularity. With the success of games like Minecraft and Grand Theft Auto V, more and more developers are starting to experiment with this type of open-ended design. We can expect to see even more massive open worlds and player-driven stories in the years to come.
However, there are some challenges that sandbox games will need to overcome. For example, many of these games are incredibly vast and complex, which can be overwhelming for players. There is also a risk of becoming too unfocused and bogged down in details.

Reply Brettenginge
12:28 PM on September 15, 2022
Introduction: what are NFTs?
An NFT is a digital asset that represents ownership of a physical or virtual object. They can be traded on an exchange like any other asset. Here's everything you need to know about NFTs and how to tra.de them
How can you trade NFTs on an exchange?
An NFT is a non-fungible token, which means it cannot be exchanged for another token of the same type. Uniswap NFTs are unique, indivisible and irreplaceable. They are often used to represent digital assets, such as artwork, music or other forms of creative expression.
The ability to trade NFTs has been made possible by the development of blockchain technology. Blockchain is a distributed database that allows for secure and transparent transactions. By using blockchain, NFTs can be bought and sold without the need for a central authority.
What are the risks of trading NFTs on an exchange?
NFT trading is a new and emerging market, which means that there are a number of risks associated with it. One of the biggest risks is that many of the exchanges that allow NFT trading are not regulated by any government body, which means that there is no protection for investors if something goes wrong.
Another risk is that because NFTs are still a relatively new phenomenon, there is not a lot of information available about them and how they work. This lack of information could lead to investors making bad decisions or being scammed.
Finally, NFTs are often stored on blockchain platforms Uniswap, which can be hacked. If an exchange is hacked and NFTs are stolen, there is no guarantee that investors will be able to get their money back.
How does it work?
NFTs, or non-fungible tokens, are digital assets that are unique and cannot be replaced. They are often used to represent items in video games or other digital worlds, and can be traded or sold on online marketplaces.
To buy or sell an NFT, you will need to use a cryptocurrency exchange that supports them. Some popular exchanges that list NFTs include OpenSea, WAX, and Enjin. Once you have found an exchange that meets your needs, you can create an account and deposit funds into it.
Once you have deposited funds, you can browse the available NFTs and choose which ones you would like to buy. Each NFT has its own price, which is set by the seller.

Reply golden goose outlet
9:33 PM on March 15, 2022
Thank you for all your work on this blog. Kim delights in conducting investigation and it's really obvious why. I hear all about the powerful form you provide priceless thoughts through the website and as well as foster response from other people on that issue then our own child is without a doubt starting to learn a lot. Take pleasure in the remaining portion of the new year. You have been carrying out a fabulous job.
golden goose outlet http://www.goldengooseofficial.com

Reply kyrie 5
9:33 AM on March 15, 2022
I enjoy you because of every one of your hard work on this website. Debby loves getting into investigations and it's really obvious why. We all notice all of the powerful form you offer priceless secrets by means of the web blog and even strongly encourage contribution from some others on that subject plus our own princess has always been discovering a lot. Have fun with the rest of the year. Your performing a stunning job.
kyrie 5 http://www.kyrie5.org
123...9Next »
/