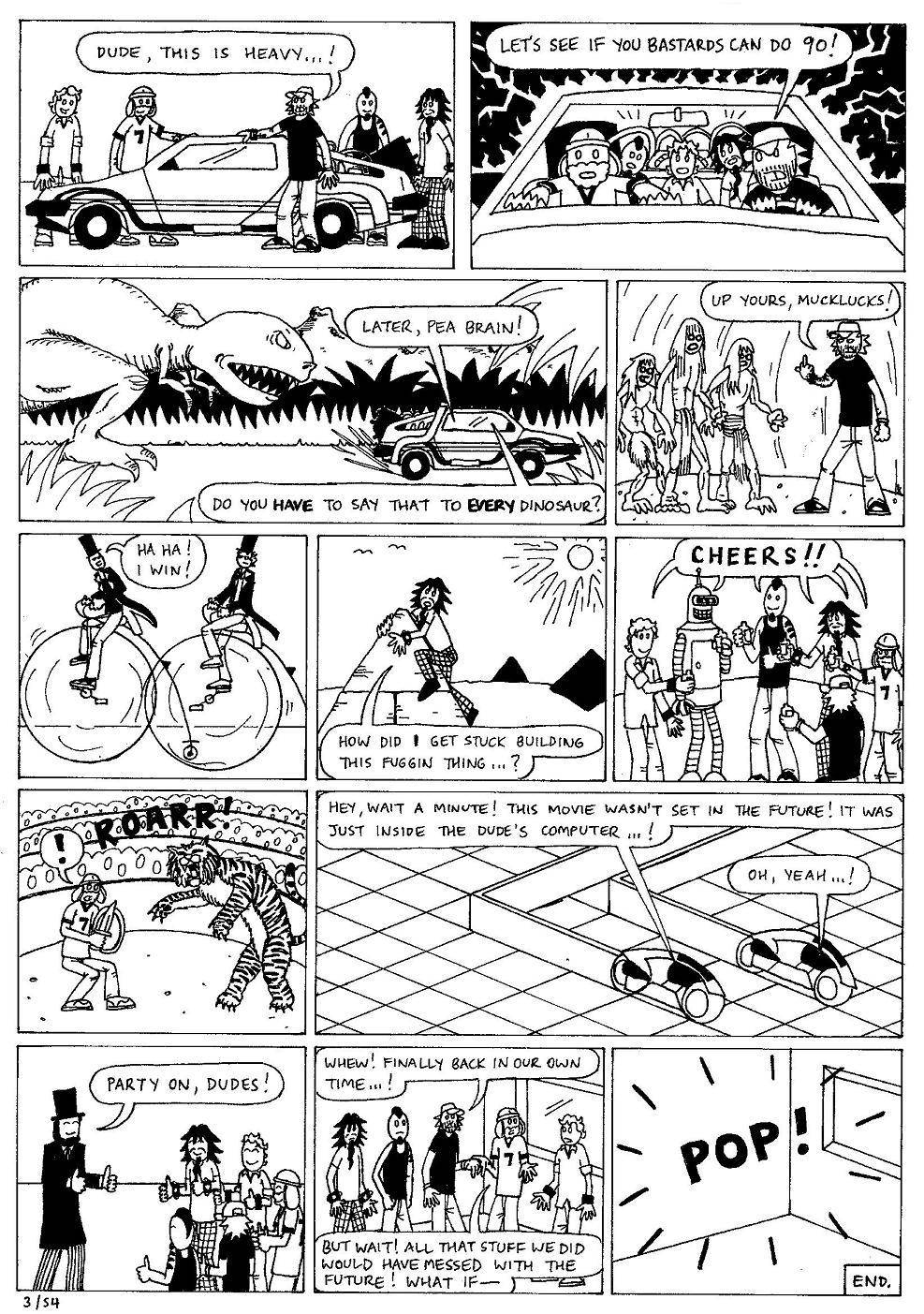 This was the only way to pay tribute to all my favourite time-travel movies - pack 'em all into one Episode! The deliberate references are as follows: Panels 1 and 2 obviously reference 'Back to the Future', with the (crappily drawn) DeLorean, the use of the word 'heavy' and Marty's 'Let's see if you bastards can do 90' line. Panel 3 is NOT a reference to 'Jurassic Park', as it occurs in the time of the dinosaurs. It does not reference any specific dinosaur movie/show. Panel 4 contains a variation of the MORLOCKS from 'The Time Machine'. Mad Dog deliberately calls them 'Mucklucks' as a sign of disrespect. This word is a reference to 'The Simpsons', as it is the word Krusty uses as an example of words you can say on TV which sound dirty, but actually aren't. Panel 5 was going to contain a reference to the movie 'Time After Time' (where Jules Verne, author of 'The Time Machine' tracks Jack the Ripper (!!!) ), but I thought it was too obscure. The penny farthings are a token nod to that similar time period. Panel 7 obviously features Bender from 'Futurama' (to the best of my memory, this is so far the ONLY inclusion of an existing outside character, not invented by me). Panel 8 references 'Gladiator', and is also an in-joke because I have suggested that Beardo could be played by Russell Crowe, but only in 'Maximus mode'. Panel 9 is an obvious reference to 'Tron', but it also contains a second, more subtle reference. The line 'It was just inside the dude's computer' refers to THE DUDE, played by Jeff Bridges in 'The Big Lebowski'. Jeff Bridges was the dude whose computer the action of 'Tron' took place in (no angry letters, please). Finally, Panel 10 contains a reference to 'Bill and Ted's Excellent Adventure', but I've previously mentioned this movie's influence on the plotline involving the band bringing back girlfriends from other dimensions... The ending is kind of 'Twilight Zone'-ish, but nonspecific. Anyway, must dash!
/